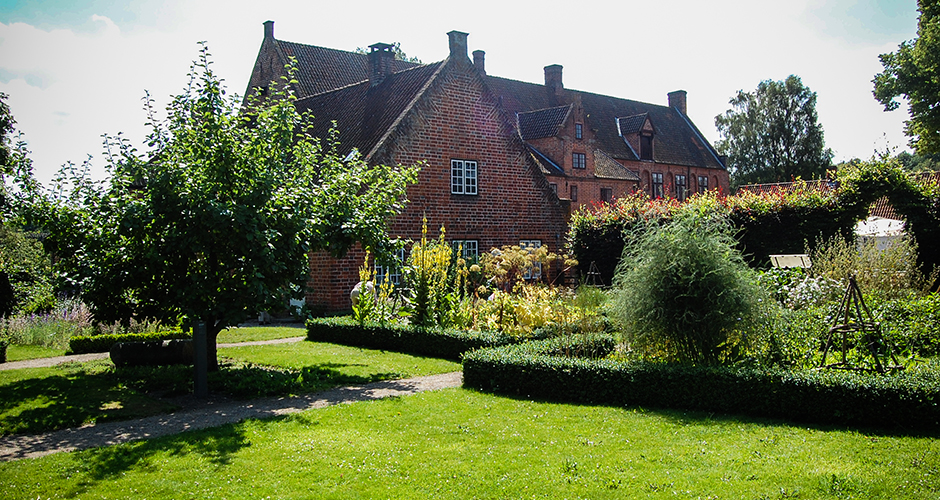 The monks at Esrum sought to create Paradise on Earth by bringing order to the untamed nature. One way of taming nature and bring order into chaos was to create an abundance of beautiful gardens both inside and around the large abbey complex. Beyond the abbey wall lies the cloister garden with medicinal plants, the apple garden which was also used for burials, as well as the cabbage garden and hop garden. The various gardens ensured the monks were self-sufficient, as prescribed by the Order.

The cloister garden is presently located next to the abbey building with a view over the meadows. It is a contemporary replica of the medieval gardens, with a collection of 200 different plants that were present in the monks’ original gardens, albeit in a new design. Each flowerbed tells a story of the plants’ medicinal use or religious significance. The flowerbed in the paradise garden contains holy flowers, such as Jacob’s Ladder or Marian Thistle. One bed tells the story of the doctrine of signature, which the medieval medicine experts inherited from the medical science from Antiquity. Upon creating Earth, God had given each plant a signature, which human could decode to see its use. In other words, it was God’s intent to give plants healing properties. The bed features, among others, birthworth whose yellow blossom resembles a cobra and therefore was used to treat snake bites.