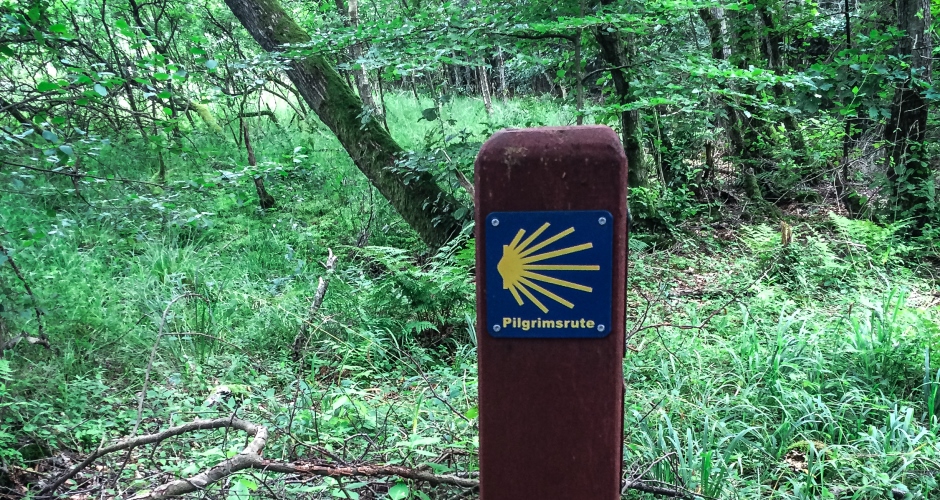 All roads leads to Esrum!

Are you on a journey from Norway to Santiago de Compostella in Spain? Are you taking a weekend off for a pilgrimage from Elsinore to Hillerød or just taking a day’s hike in Gribskov?

At Esrum we welcome you with open arms. You can settle down in the Abbey Cellars, get good advice for the journey or enjoy a piece of cake and coffee. You can buy food and drinks for the journey at Møllecaféen (The Mill café) next to the abbey.

Esrum Abbey was bestowed a gift by Magaret I in the December of 1411. The gift consisted of 5000 Lubeck marks of which half was earmarked for the expansion of the nunnery, Vor Frue, in Roskilde and the other half for Christians and the needy as well as pilgrimages. A lot of pilgrimages had the abbey as a point of departure on that basis.

The North Zealand part of the route from Trondheim to Spain goes from Elsinore pass by Esrum to Hillerød.

From Esrum the route pass Daniel’s Spring on the beautiful edge of Esrum Lake alongside Gribskov forest with a look at the King’s spoke and beech, by Nødebo through Gribskov to Hillerød.

The Monastery Route usually goes through trails and small roads. It is not separately marked but often follows other marked routes. Historic stretches of road and pilgrim destinations are included wherever possible. It can be travelled by foot and bike.

The Monastery Route is is described in a series of guide books by Jens Kristian Krarup. The North Zealand portion of the route is is covered in Fra Helsingør til Slangerup. The book is available for purchase at Esrum Abbey.